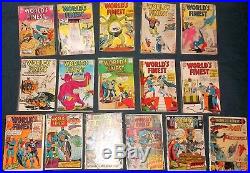 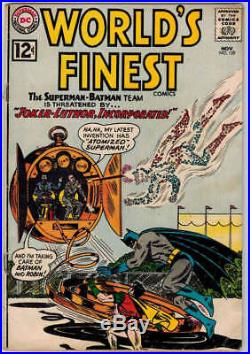 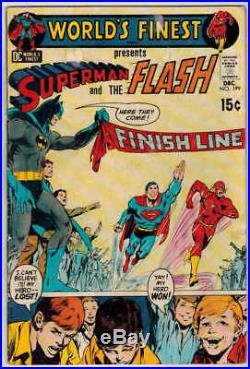 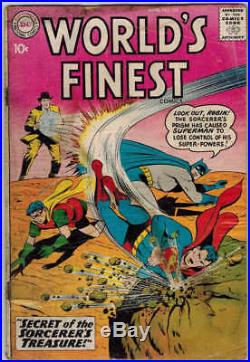 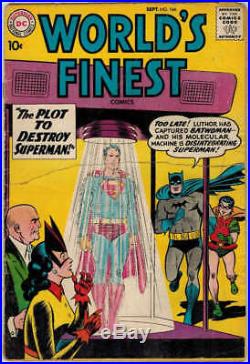 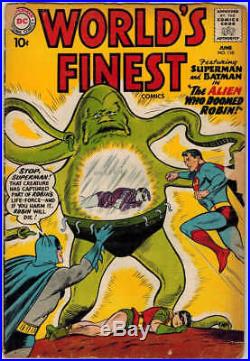 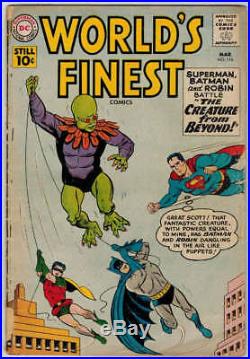 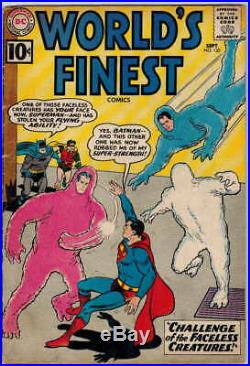 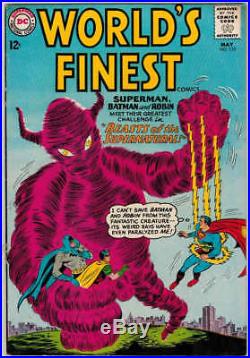 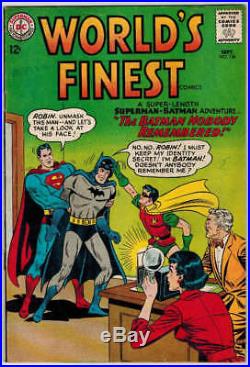 And check out OUR NEWLY LISTED ITEMS. This is Worlds Finest Comics #103, 104, 110, 116, 120, 129, 133, 136, 143, 147, 155, 165, 178, 181, 187, and 199, published by D. These are great books in the classic run of the Dark Knight and the Man Of Steel in the Silver Age. These issues feature classic story and art by legendary writers and artists Curt Swan, Stan Kaye, Bill Finger, Dick Sprang, Sheldon Moldoff, Henry Boltinoff. Jack Miller, Jim Mooney, Bob Haney, Lee Elias, Jerry Coleman, Ed Herron, Dick Dillin, Dave Wood, Ramona Fradon, Edmond Hamilton, George Klein, Robert Bernstein, E. Nelson Bridwell, Ruben Moreira, Al Plastino, Sid Gerson, Murphy Anderson, Joe Giella, Neal Adams, Cary Bates, Jack Abel, Wayne Boring, Irv Novick, Ross Andru, Mike Esposito, Otto Binder, Jerry Siegel, John Forte, Robert Kanigher, Dennis O’Neil, and Jack Kirby. Issue #129 is the classic Joker-Luthor, Incorporated! , where the Joker and Lex Luthor team-up to take on Batman, Robin, and Superman. Issue #199 is the classic 3rd Superman/Flash race. Back-up stories feature Tommy Tomorrow, Green Arrow and Speedy, and more. Included are some classic 10 cent, 12 cent, and 15 cent issues, and some great reading. There are also ads featuring Brave and the Bold #30 with the Justice League of America and Showcase #26 with Rip Hunter Time Master, a full-page ad for Rip Hunter Time Master #1, a full-page ad for Brave and the Bold #34 with the first Silver Age Hawkman, an ad for Giant Batman Annual #1 and Superman Annual #3, a full-page ad for The Atom #3 with the introduction and 1st appearance of Chronos, a full-page ad for Metal Men #1, a full-page ad for Brave and the Bold #47 with Strange Sports Stories, a full-page ad for Lois Lane 80 Pg. Giant All-Wedding Issue, featuring Lois’ schemes and dreams to marry Superman, and a full-page ad for Captain Action and Action Boy meet Dr. Issue #103 has heavy cover soiling and staining, which extends into the first page mostly in the bottom left corner area. Issue #104 is an incomplete very low grade reading copy. The front cover was torn across the middle and repaired with tape, and is missing pages. The Batman/Superman/Batwoman/Luthor story looks to be complete, but it looks like pages 1-4 of the Tommy Tomorrow story is missing and the centerfold is detached from the staples. Issue #110 has a piece missing from the middle right side of the front cover, and a larger 4″ by 2″ piece missing from the lower left side of the back cover, as well as a 2 split near the top of the spine, and a date stamp in the middle of the front cover. Issue #116 has pieces missing at the top and bottom left edges of the front cover, cover creasing and edgewear chipping, and multiple extra staples added to the left edge of the spine. Issue #120 has general cover wear and spine stress lines, and the cover is detached at the top staple. Issue #129 has cover creasing and tearing around the top and bottom staple, as well as a small chip out of the top right corner of the back cover. Issue #133 has a sharp and clean cover and very nice page quality, but there is tearing at the staples, and the cover is fully detached from both staples. Issue #136 has general cover wear, as well as a small pen mark and faint date stamp on the front cover. Issue #143 was taped and the entire length of the spine on the front and back cover has discolored as a result. There is also cover spotting and creasing, and additional staples were added, so the issue does not open as fully as it should. It looks like someone also added some red coloring to the lower part of the front cover. Issue #147 has general cover wear and a spine roll, as well as an X pencil mark on the front cover, and tearing at the lower staple and at the middle edge of the back cover. Issue #155 has cover creasing and a 2 split at the bottom of the spine, as well as some writing on an interior subscription page. Issue #165 has general cover wear, some small pen marking on the front cover, and a small hole at the bottom left corner of the back cover. Issue #178 has minor general cover wear. Issue #187 has minor general cover wear. Issue #199 has cover wear and stain spots, as well as additional staples added. These are classic 1950’s and 1960s issues, and a key DC addition to any collection. Check out our other auctions for more great items. Check it out, you’ll be glad you did! The item “1959-1970 WORLD’S FINEST COMICS LOT #103, 104, 129 199+ BATMAN SUPERMAN JOKER DC” is in sale since Friday, August 31, 2018. This item is in the category “Collectibles\Comics\Silver Age (1956-69)\Superhero\World’s Finest”. The seller is “satchj3″ and is located in Brooklyn, New York. This item can be shipped worldwide.