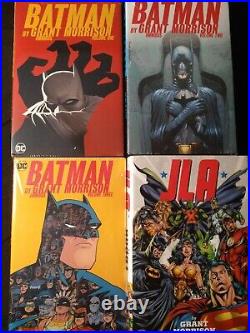 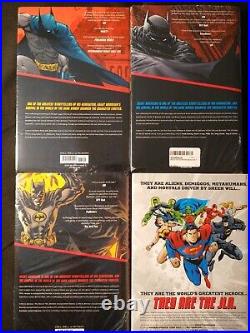 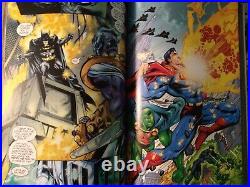 Grant Morrison Hardcover Omnibus Lot (Batman Omnibus Vol’s 1-3, JLA Omnibus). Batman Omnibus by Grant Morrison Volume 1 – BRAND NEW, SEALED. Now collecting the entirety of this epic saga, this first of three omnibus collections introduces Batman to his son, Damian Wayne, and takes the Caped Crusader from the brink of death to the edge of madness. These blockbuster stories, including the now-classic. Batman & Son, Batman: The Black Glove. Feature a deconstruction of superhero comics like no other, with a challenging, thought-provoking take on the man behind the cowl. #655-658, #663-683 and stories from. #0 and #30 and #47, from artists Andy Kubert, J. Williams III, Tony S. Daniel and more, along with two brand-new pages from superstar artist Chris Burnham. The Resurrection of Ra’s Al Ghul. Batman Omnibus by Grant Morrison Volume 2 – BRAND NEW, SEALED. Grant Morrison’s plunges the Dark Knight into his wildest adventure yet. Batman has proven he can win no matter the odds, but what happens when his opponent is death itself? Collects, in reading order for the first time ever. Batman: The Return of Bruce Wayne. Groundbreaking artists Frank Quitely, Frazer Irving, Philip Tan, Andy Clarke, Tony S. Daniel, Cameron Stewart and more, including a treasure trove of behind-the-scenes content. Batman Omnibus by Grant Morrison Volume 3 – BRAND NEW, SEALED. Morrison continues his earth-shattering run on the Batman titles with this exciting series illustrated by hot artist Yanick Paquette who features the next stage of evolution of the Dark Knight. Bruce Wayne publicly announces that he is the financial backer of Batman and establishes a worldwide franchise of Batman that will protect the entire globe. This is the beginning of a stunning direction for the World’s Greatest Detective that will team him with Catwoman, Batwoman and Batman on international crime-fighting missions against villans like Lord Death Man in Japan, Argentina, and other parts of South America. This third omnibus edition collects. Batman Incorporated: Leviathan Strikes. JLA Omnibus by Grant Morrison – Dust jacket in GOOD condition with noticeable shelf wear. THEY ARE ALIENS, DEMIGODS, METAHUMANS, AND MORTALS DRIVEN BY SHEER WILL… THEY ARE THE WORLD’S GREATEST HEROES… THEY ARE THE JLA. This is a dark new era where aliens from another world, evil masterminds, and even the old gods themselves are waiting to test the JLA’s mettle. Battles will be fought, allies will be gained and lost, and the League will be pushed to its limits like never before. THE GODS WALK AMONG US. In a world where superhumans live side-by-side with mortals, the people of Earth can take comfort that some of these powerful beings are on the side of good. Superman, Batman, Wonder Woman, the Flash, Green Lantern, Aquaman, and Martian Manhunter are the world’s first line of defense against alien invaders and supernatural entities. Time and again the JLA has rallied to save humankind from the brink of extinction. These are the adventures that have made them living legends. The JLA by Grant Morrison Omnibus. Collects acclaimed writer GRANT MORRISON’s prolific. Run, accompanied by artists HOWARD PORTER, JOHN DELL, and PAT GARRAHY. This deluxe volume also includes the groundbreaking. Graphic novel illustrated by FRANK QUITELY, plus bonus material from the “DC One Million” event and more. This item is in the category “Collectibles\Comic Books & Memorabilia\Comics\Comics & Graphic Novels”. The seller is “sunshine_trading_inc” and is located in this country: US. This item can be shipped to United States. 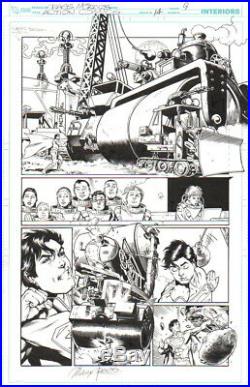 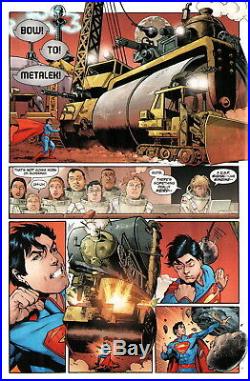 A beautiful page of 2012 Superman original art by legendary comic artist Rags Morales! This is the original art to Action Comics # 14, page 9 and features Superman, Metaleks. On this page: Superman goes to Mars to save the colony there and stop the mechanized aliens, known as Metaleks, from destroying the colony! But, the Metaleks have other ideas! Written by superstar writer Grant Morrison! See color scan of published page for more. The art on this page was penciled by Rags Morales and inked by Mark Propst! Rags has signed the art on the bottom of the page! PLEASE NOTE: This is an original, hand drawn piece of published Grant Morrison’s Superman art, not a print, copy or facsimile! This 11 X 17 inch page of art on bristol board is in excellent condition and would make a great addition to any Superman, Metaleks, Grant Morrison, Rags Morales or Mark Propst collection! It could also make a GREAT GIFT! These charges are the buyers responsibility. And, check out my other auctions for great original comic book art! The item “GRANT MORRISON’S ACTION COMICS ART-SUPERMAN-BY RAGS MORALES-2012-FREE SHIPPING” is in sale since Friday, October 26, 2018. This item is in the category “Collectibles\Comics\Original Comic Art\Interior Pages”. The seller is “stevo861″ and is located in Fort Lauderdale, Florida. This item can be shipped worldwide.